How to read a Jamabandi ……(fard, revenue record)


How to read a Jamabandi ……(fard, revenue record)

Jamabandi is the most important document of revenue record. It is known by different name like fard, parcha or many other different names in different areas, but most common name is JAMABANDI. It is believed that reading of jamabandi is a very specialized task of revenue officials and far away from the knowledge of general masses. It is also misappropriated that reading of jamabandi or acquiring the knowledge of revenue record is only limited to revenue official especially patwari or kango and other do not have any need for it.

But in present circumstance when everybody who is involved in buying and selling property, agricultural land on regular or occasional basis, getting loan on movable or immovable property or offering any guarantee of any loan/ credit whether short term working capital loan, medium term loan or long term loan, everybody should have a basic knowledge of revenue record. It not only helps to boost the confidence of investor of borrower but also save him from fraud, misappropriation or any other litigation.

Coming back to jamabandi, this record expresses a lot of things. Instead of showing the ownership and possession, jamabandi also gives knowledge about type of land, its holding status, source of irrigation if cultivated, the type of structure built on it, the nature of owner, location of land, its fragmentation type and a lots of other things.

In column number 3 Patti, Taraf or numberdar are mentioned. This column is ment for providing the information about physical location of land. In many villages particular cast is living in patti, hence the name of patti is mentioned as per their cast. Sometimes the location is identified through its numberdar, but the only objective is to find the location of land.

In column number 6 Naam chah etc is mentioned which is not at all important.
In column number 7 number khasra is mentioned. This is the important column of jamabandi. Number Khasra is the number of land holding, which remain same in all the jamabandi. If it is divided in parts it is written as khasra number 1/1, ½ when khasra number is divided in two parts. When khasra number 1/1 is again divided in two parts then it will become 1/1/1 and 1/1/2 and so on. It must be remembered that khasra number will never be changed. If the measurement is in kanal marla system then first murrabha number/ mushkeel number/ rectangle number is written in red ink underlined by two straight parallel lines then khasra numbers are written in black ink. In case of bigha- biswa system only khasra numbers are written with black ink. There is no murrabha number in bigha biswa system. Total number of khasras are mentioned in the end as kittas. E.g. if there are 15 khasras in one khewat then at end total kitta are mentioned as 15.

In column number 8 the area of each khasra is mentioned. Mostly the maximum area is 8 kanal 0 marlas (means one acre). But when the land is not cultivated or hill or desert. Then total area is mentioned in one khasra also which may exceed one acre. Type of land is also mentioned below the area of khasra. If it is not cultivated or some building is constructed over it then “gair mumkin” is written, when irrigated by wells then “Chai” is written, when irrigated by canal, then “Nehri” or “abbi” is written, when it is rainfed then “Barani” is written. In some areas the direction of this piece of land is also mentioned here like “Charda” is written for east direction (rising side of sun) “neevan” for west side, “Pahar” for north side (Himalaya side) and “Dariya” for south side. Sometime type of cultivation is also mentioned like “Bagicha” ( orchard), “Poplar”, Sarkanda or Munji is also written in this column. The total of areas is made at the end of khatuni and then Khewat. It must be noted that total of Kita and area should tally at end of each Khatuani and total of Khatuani should tally at end of Khewat. The khasra and area are not changed in next or previous jamabandi, as the area of land remains constant.

In column number 9, 10 and 11 the detail of lagan etc are mentioned but not important for transaction motive, but its importance may vary from area to area.

Column number 12 is most crucial column in jamabandi. It is a remarks column and any entry made in this column may change the status of owernership or possession of land. The entry in this column is made through red ink and every entry is having one specific reference number or intkaal number or rapat number. All entries pertaining to sale purchase or any other type of transaction in current jamabandi period is mentioned in this column. In next jamabandi these entries are transferred to khewat or khatunai column of jamabandi. The common practice of entry in this column is like “ Baruae rapat or intkaal number (reference number), date, wallon (by) tranferrer name Bahak or bae (sold)/ rehan (pledge means given possession)/ aadrehan (without possession)/ Hiba (gift deed)/vasihiat (will) etc. khasra number (so and so) kul (total) kita and area banam (in name of) buyer, bank etc.  for amount  (such and such) kar diya hai (have done it). These are followed by signature of patwari or revenue officer.

At last the patwari/ revenue officer give the undertaking as “Tasdik kiya jata hai ki Nakal Mutabik Asal hai” means certify as true copy. Sometime also mention about the fee paid by the applicant for this copy. Now a days computer generated attested copies are also available. But in some area these are very lengthy and unable to understand.

But the patwari record is the actual and lasted updated record available. It is recommended that while purchasing any land it should be ensured that its entry has been made in records of concerned patwari and is advisable to keep a copy of your transaction entry in your records.

It is a general practice that after the registry is made in sub registrar office, its entry will be made in intkaal registar and the copy of intkaal is issued, its entry is then made in rognamcha (daily diary) of patwari. Then patwari make this entry in jamabani. Until then the entry is made in jamabandi of patwari, the chances of double sale of property, double mortgage of same land to different banks, double charge over same property and occurrence of other fraudulent activity may be there. Hence red ink entry of mutation should be ensured in jamabandi of patwari. In the case of double entry on same property the then the right of person having first entry is the first.

Sometime when the land is dispersed in different khasras and mutation has been made then only the detail of mutation or rapat is mentioned in main khewat where the area is maximum and only the mutation and rapat number is mentioned in rest khewats. In this case it is advisable to check the complete details of mutation or rapat of that number when the khasra in question is in process of purchase or transfer. Ignoring the number may cause severe consequences in future and drag the property in dispute.

So these are the basics of jamabandi. The terminology and process may vary from location to location. This type of terminology or process is prevalent in north part of India particularly Punjab, Haryana, North part of Rajasthan, Jammu, and part of Himachal Pradesh.
Your feedback and suggestions regarding any omission or mistake are welcome. 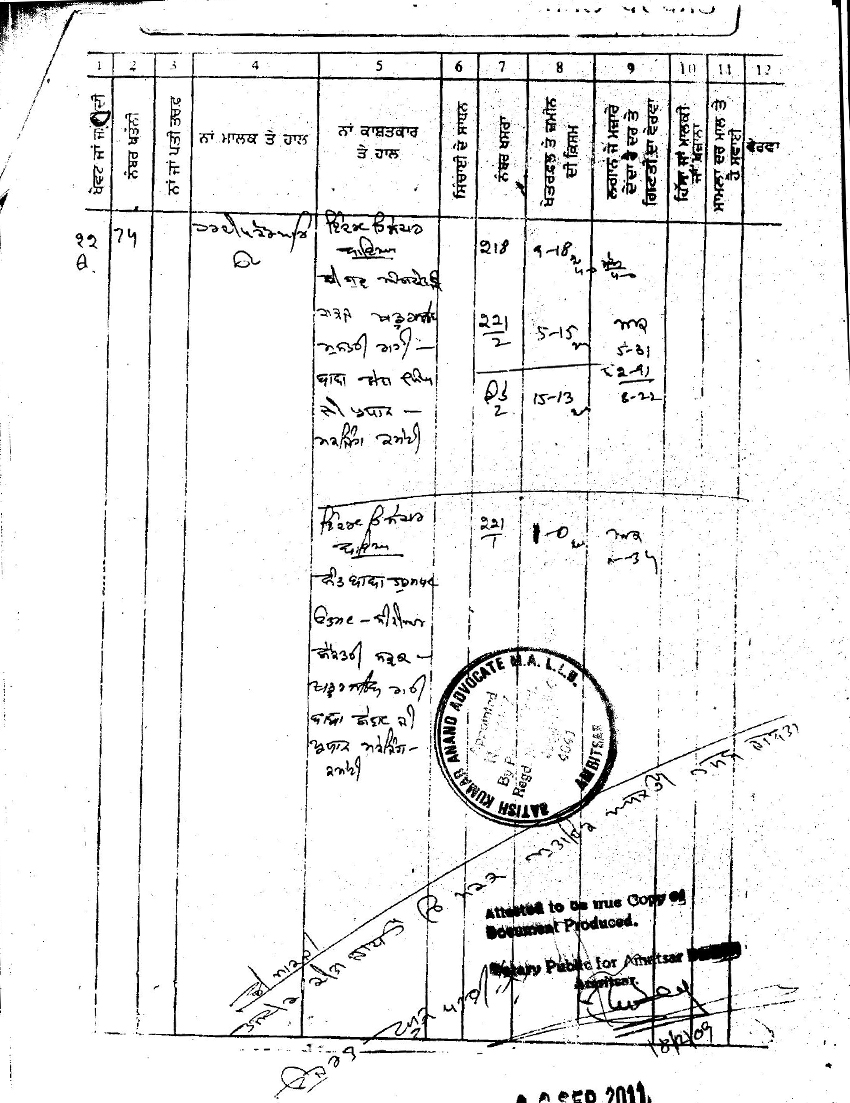